On the 12th of June, 1897, a group of Italian cyclists travelled the route between Rome and Naples, a distance of 230 kilometers, in a single day. Given the difficult cycling conditions of that time, this effort was considered to be “audacious”.

In France, at the end of the nineteenth century, the first cycle tourists had begun to organise, together with hikers. The creation of the Touring Club de France, on March 31, 1890, was the result of this coming together.

In 1904, Henri Desgrange, founder of the Tour de France in the previous year, founded Audax France on the model of Audax Italiano. He conferred on the Audax Club Parisien, newly created on November 30, 1904, the authority to certify brevets ridden under Audax rules in France.

From the outset, the club was a success. The A.C.P. members were all experienced cycle tourists hardened by long distance cycling. They became adept at the task of “ride captain”, and at guiding group rides at an 18 kilometer per hour pace, which, until 1945, was considered to be the correct Audax pace.

At that time, only the 200 kilometer distance was considered to be a brevet, the completion of which entitled a cyclist to be designated “Audax”. Beyond this, rides of 300 and 400 kilometers, were organised by the A.C.P.. 600 kilometer rides would appear a little later. 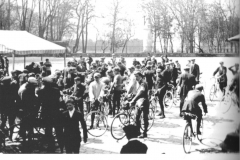 Le Velo
In that year, Victor Breyer (Translator’s note: formerly a journalist with Paris-Velo and a sometime colleague of Henri Degrange: he was the journalist who researched and scouted the original route for Paris – Roubaix), who at that time was editor of the newspaper L’Echo des Sports, undertook to organise a hiking event that had been in abeyance, the Polymultipliee. He asked for the assistance of the A.C.P. which had helped to stage the two previous editions of this event in 1913 and 1914.

The assistance given by the club to L’Echo des Sports, a competitor of L’Auto, prompted Henri Desgrange to write an editorial in that paper rescinding the right of the A.C.P. to certify Audax brevets.

This led to a break up of the organisation. Several ride captains and hikers left the A.C.P. and continued to organise their events under the direction of L’Auto. They created L’Union des Audax Cyclistes Parisiens (U.A.C.P.) which was later to become L’Union des Audax Francaises (U.A.F.).

The U.A.F. today certifies brevets ridden at a constant speed of 22.5 kilometers per hour ridden under the direction of ride captains, whom riders may not overtake. These rides are known as Brevets Audax. 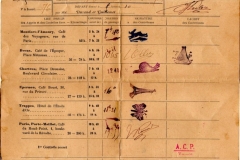 Abernat 1920
The first 1,000 kilometer event was organised somewhat later, on the 15th of August, 1934, three years after the first Paris – Brest – Paris in which non-professional cyclists were permitted.

In 1991, the club celebrated the centenary of Paris – Brest – Paris, an event first organised by Le Petit Journal in 1891.

Another noteworthy event was the creation, in 1923, of the Federation Francaise des Societes de Cyclotourisme (FFSC) which grouped together French clubs devoted to bicycle tourism. Gaston Clement, a founding member of the A.C.P. was the first president of this organisation. This Federation became, in 1942, the Federation Francais de Cyclotourisme (F.F.C.T.) that remains the principal association of French cycle tourism to this day.

Today, the Audax Club Parisien is one of the largest cycling clubs in Paris and in France. Since 1976, brevets certified by the A.C.P. have been ridden in countries outside of France. These are known as the Brevets des Randonneurs Mondiaux.