The events listed below are still belonging to the ACP, but they are no longer organized.

In addition to the Brevets Audax held until 1921, the club also organized raids of 300 and 400 km. From 1914, these raids were no longer controlled by road captains. The participants were free to ride alone and pace themselves, their only obligation being to validate the various fixed or secret controls.

In 1913 and 1914, then from 1921, the ACP supported the organization of the Polymultipliée de Chanteloup, a single-day bicycle race on a 10 km long circuit located in Chanteloup-les-Vignes, also called Trophée des Grimpeurs (climber’s trophy). The circuit included a very hard climb, and the word polymultipliée refers to the fact that the initial purpose of the race was to highlight the usefulness of derailleur and low gear. This championship later became the Brevet de Grimpeur de Chanteloup (Chanteloup climber’s brevet). Competitors had to complete 10 laps of the circuit in 5 hours maximum. Their card had to be stamped on each lap, and walking was prohibited. 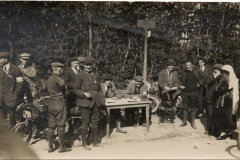 During the interwar period, the ACP was the most important club in Paris and surroundings. At the end of the 1930s, always ahead of time, the club created two new organizations that were very successful after World War II.

First, the Critérium d’Hiver Parisien (Parisian Winter Criterium) consisted of riding alone a route in Paris or the very close suburbs, reaching briefly indicated control places, and answering a questionnaire which riders received at the start and handed in at the finish. The classification was made according to the real time taken to complete the circuit, possibly increased by the penalties granted for incorrect answer or no answer.

Second, the Critérium des Cyclotouristes (Cyclotourists’ Criterium) was a summer event of about 90 km, run on all passable terrain, with a minimum average of 15 km/h. The participants left separately and were possibly dispersed at each control, each being thus obliged to read the map in order to find the next control which was briefly indicated. It was neither a race nor a brevet, but a fun event, at the same time touristic (since often off the beaten track), sportive (pure speed did not count, but a minimum of physical condition was required), and technical (participants being left to themselves from the start, they had to know how to find their way and repair their bikes).

The Journée Vélocio Parisienne (named later Matinée Vélocio) is a meeting day for promoting bicycle touring (and touring bicycles), which includes an individual time trial with hill climb. It was one of the flagship organizations of the ACP. The first edition took place in 1924, in Côte de la Madeleine (Vallée de Chevreuse). In 1925 it was organized in Côte de la Jonchère (Bougival) and, from 1926, it took place in Côte de la Barbannerie (Maurecourt), then in Côte de Jouy-le-Moutier. Canceled in 1980 by lack of authorization, it moved in 1981 and 1982 to Côte des Princes (Val-d’Oise).

It then disappeared from the calendar of the French Bicycle Touring Federation, because it was a racing event. The ACP tried to save it by organizing under the aegis of another French cycling federation, the UFOLEP and, from 1983, on the road circuit of Autodrome de Montlhéry. The event was finally abandoned in 1988.

Spécialités T.A. is a French equipment manufacturer of aluminum chainrings and cranksets. The creation of the Brevet de Grimpeur T.A. (T.A. Climber’s Brevet) in 1974 was the logical continuation of the Chanteloup’s climber’s trophy (see above), which could no longer take place on the Chanteloup circuit. The 5-hour time limit was maintained, but riders were no more ranked. The only old rule kept was that bikes had to be equipped with front and rear mudguards.

This brevet was extended to the whole of France in 1975, one year after the creation of the Super Brevet de Grimpeur T.A. (for those who had ridden successfully the Brevet de Grimpeur T.A). The Super Brevet was intended to be a sort of national grand finale, a bicycle party. It was organized for 5 years in Verdigny on a particularly difficult course, then passed through Neufchâtel-en-Bray and Trucy. The last edition took place in 1987.

George Navet is the founder of Spécialités T.A. (see above). The national challenge George-Navet was created in 1980 by the ACP under the auspices of the French Federation of Bicycle Touring, and organized until 1992. It was intended to promote long-distance cycling. Each year, 60 events of at least 200 km were selected. The challenge was open to all cyclist touring clubs in France. The organizing clubs proposed their routes and sent the results to the ACP each year. Being part of the challenge ensured the organizers some publicity.

The Gentlemen Parisiens were organized for the first time in 1965 on the circuit of La Malnoue in Croissy-Beaubourg. It was a team time trial with two members per team and time adjustments according to age. The time was taken on the second team member (the older of the two men, or the woman in the case of a mixed team). For every month over the age of 40 for men (or the age of 35 for women), one second was subtracted from the actual time.

From 1981, the French Federation of Bicycle Touring being no longer allowed to oversee any competitive event, the ACP organized the Gentlemen Parisiens under the aegis of another French cycling federation, the UFOLEP, until 2010. The editions took place successively in Le Plessis-aux-Bois, on the road circuit of Autodrome de Montlhéry (from 1982), and in the forest of Rambouillet, near Poigny-la-Forêt (from 1995).